Multi-component metal oxides exhibit a plethora of stoichiometry-dependent structural phases at the surface, even if the composition of the bulk is kept the same. The long-term objective of P02 is to unravel the relationship between surface electronic and geometric structure and reactivity, to ultimately tune these materials for energy-related reactions such as the ORR. The project applies the surface science approach. We will grow well-defined, epitaxial perovskite thin films of LSFO and LSMO in a UHV-based PLD/surface science apparatus under tight control of the surface stoichiometry in the first project period. We will determine the coordinates of surface atoms quantitatively using LEED-IV in close collaboration with theoretical groups.

Theoretical models will also help with interpreting atomically-resolved ncAFM/STM images. These images give direct insights into the behavior of polarons in these complex materials and show how adsorbates such as O2, H2O, CO, and CO2 interact with electronic and structural defects. XPS, TPD, and FTIR of these well-defined systems will deliver desorption energies, vibrational frequencies, and spectral fingerprints. These experimental data on well-defined systems will build a bridge when tested under ‘realistic’ environments at high pressure/temperature and in aqueous solutions. They will also serve to validate ML-based theory approaches. 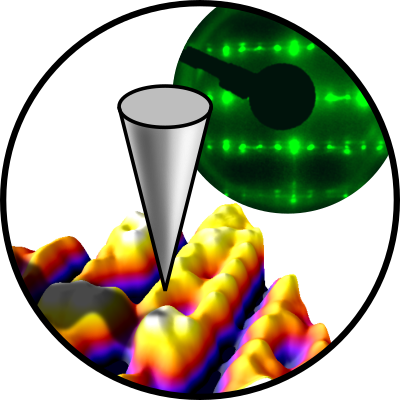 Analysis techniques used in our research include:

Of particular use for TACO is our combined Pulsed-Laser Deposition/Surface Science setup shown on the right-hand side. It allows the growth of multi-component metal oxides and the investigations of surface properties within the same UHV setup. 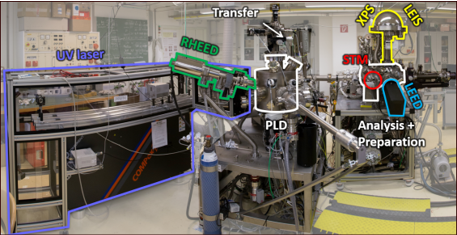 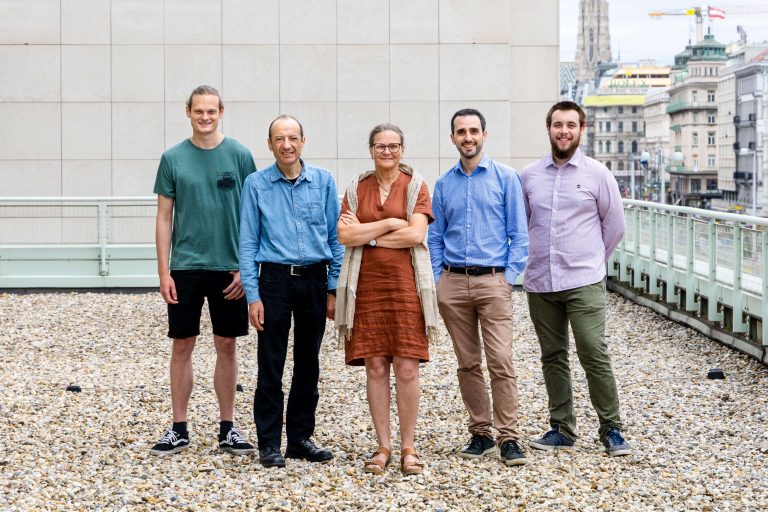 Polarons are quasiparticles that easily form in polarizable materials due to the coupling of excess electrons or holes with ionic vibrations. These quasiparticles manifest themselves in many different ways and have a profound impact on materials properties and functionalities. Polarons have been the testing ground for the development of numerous theories, and their manifestations have been studied by many different experimental probes. This Review provides a map of the enormous amount of data and knowledge accumulated on polaron effects in materials, ranging from early studies and standard treatments to emerging experimental techniques and novel theoretical and computational approaches.

The atomic-scale properties of lanthanum–strontium manganite (La1-xSrxMnO3−δ, LSMO) surfaces are of high interest because of the roles of the material as a prototypical complex oxide, in the fabrication of spintronic devices and in catalytic applications. This work combines pulsed laser deposition (PLD) with atomically resolved scanning tunneling microscopy (STM) and surface analysis techniques (low-energy electron diffraction – LEED, X-ray photoelectron spectroscopy – XPS, and low-energy He+ ion scattering – LEIS) to assess the atomic properties of La0.8Sr0.2MnO3(110) surfaces and their dependence on the surface composition. Epitaxial films with 130 nm thickness were grown on Nb-doped SrTiO3(110) and their near-surface stoichiometry was adjusted by depositing La and Mn in sub-monolayer amounts, quantified with a movable quartz-crystal microbalance. The resulting surfaces were equilibrated at 700 °C under 0.2 mbar O2, i.e., under conditions that bridge the gap between ultra-high vacuum and the operating conditions of high-temperature solid-oxide fuel cells, where LSMO is used as the cathode. The atomic details of various composition-related surface phases have been unveiled. The phases are characterized by distinct structural and electronic properties and vary in their ability to ccommodate deposited cations.

Interplay between Adsorbates and Polarons: CO on Rutile TiO2(110)

Polaron formation plays a major role in determining the structural, electrical, and chemical properties of ionic crystals. Using a combination of first-principles calculations, scanning tunneling microscopy, and atomic force microscopy, we analyze the interaction of polarons with CO molecules adsorbed on the reduced rutile TiO2(110) surface. Adsorbed CO shows attractive coupling with polarons in the surface layer, and repulsive interaction with polarons in the subsurface layer. As a result, CO adsorption depends on the reduction state of the sample. For slightly reduced surfaces, many adsorption configurations with comparable adsorption energies exist and polarons reside in the subsurface layer. At strongly reduced surfaces, two adsorption configurations dominate: either inside an oxygen vacancy, or at surface Ti5c sites, coupled with a surface polaron. Similar conclusions are predicted for TiO2(110) surfaces containing near-surface Ti interstitials. These results show that polarons are of primary importance for understanding the performance of polar semiconductors and transition metal oxides in catalysis and energy-related applications.

Geometric and electronic surface reconstructions determine the physical and chemical properties of surfaces and, consequently, their functionality in applications. The reconstruction of a surface minimizes its surface free energy in otherwise thermodynamically unstable situations, typically caused by dangling bonds, lattice stress, or a divergent surface potential, and it is achieved by a cooperative modification of the atomic and electronic structure. Here, we combined first-principles calculations and surface techniques (scanning tunneling microscopy, non-contact atomic force microscopy, scanning tunneling spectroscopy) to report that the repulsion between negatively charged polaronic quasiparticles, formed by the interaction between excess electrons and the lattice phonon field, plays a key role in surface reconstructions. As a paradigmatic example, we explain the (1×1) to (1×2) transition in rutile TiO2(110).