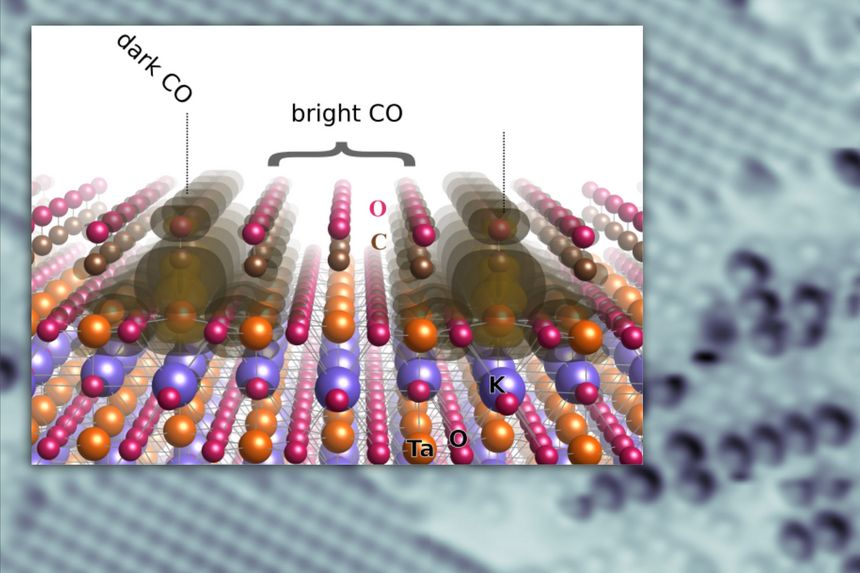 Recently, TACO scientists published a paper in Nature Communications about how excess electrons arrange on the surface of the perovskite crystal KTaO3 (i.e., potassium tantalate). It was only the first of a pair of high-profile articles that targeted this intriguing oxide surface. The second paper by Zhichang Wang et al. was just published in the journal Science Advances and deals with the surface chemistry of KTaO3.

The team of authors, which includes the three TACO PIs Gareth Parkinson, Ulrike Diebold, and Cesare Franchini and the TACO-external collaborator Martin Setvin, used the carbon monoxide (CO) molecule as a model case to identify the key processes that impact the surface chemistry on polarizable materials. While the first paper established that the excess electrons on the TaO2 termination of the cleaved crystal form charge density waves, polarons, and bipolarons, this second paper investigates how CO couples to these diverse states of excess charges.

For this end, isotopically labeled 13CO was carefully dosed on the KTaO3 surface at cryogenic temperatures in an ultrahigh vacuum chamber. The crystal surface was then scanned with the tip of an atomic force microscope (AFM). However, the AFM tip used in the experiment was not a usual purely metallic one, but in this case, it was decorated (or “functionalized”, as surface scientists say) with a single CO molecule. This technique of a CO-terminated tip has at least two advantages: First, the tip becomes chemically inert and does not react with other molecules that “sit” on the surface (so-called adsobrates). Second, because the CO on the surface repels the CO on the tip, the resulting atomically-resolved images achieve high contrast.

The curious result of these experiments was that the scientists found two “species” of CO on the TaO2 terraces: a “bright” one and a “dark” one. Both are located at Ta atoms that look equivalent at first sight. The scientists could demonstrate with a technique called temperature programmed desorption (TPD) that the dark CO is more strongly bound to the surface. It is the only species left once the sample is heated beyond some ~145 K – the bright, weakly bound CO had left the surface at even lower temperatures.

The interpretation of these results is that the dark CO molecules are those that couple to sites where so-called bipolarons, formed by two excess electrons on the polar surface, are located on one Ta atom. On the other hand, the bright CO molecules are similar to CO in the gas phase. The coupling type also affects the bonds in the KTaO3 surface and the CO molecules themselves. The Ta atoms, which are usually slightly buckled down with respect to the O atoms on a clean surface, reverse their buckling if they host a bipolaron. Also, the bond between the C and the O atom in the dark CO molecules is significantly weakened. This means that the molecule is activated and more amenable to catalytic reactions.

TACO Co-PI Michele Reticcioli supported the experimental efforts with density functional theory (DFT) calculations. These demanding computations made use of the VASP code and were run on the Vienna Scientific Cluster supercomputer. The DFT calculations confirm the coupling of CO molecules to bipolarons to be a stable configuration; other binding options turned out to be less stable.

With this study, the TACO scientists could shed light on the fundamental processes taking place on polar crystal surfaces such as KTaO3. These insights might pave the way for appealing applications of these surfaces in catalytic processes.

The full article can be found here.

A German TU news article about the publication can be found here. 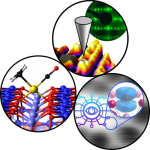